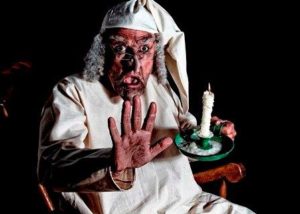 A Christmas Carol published in 1843, is one of Charles Dicken’s most popular novels and has been the subject of numerous films, TV series and musicals. Dickens wrote the story in six weeks, during October and November of 1843 to highlight the plight of poor children.

It’s the story of Ebenezer Scrooge, a greedy miser who hates Christmas, but is transformed into a caring, kind-hearted person following the visitations of four ghosts.

A Christmas Carol was illustrated by John Leech. In 1849 Leech had an accident, leaving him concussed. The doctors who treated Leech failed to relieve his symptoms leaving him in a great deal of pain and unable to rest. When Dickens learned of Leech’s condition, he rushed to his friend’s aid and offered to treat him with mesmerism (a forerunner of hypnosis). Within a few days Leech’s condition had significantly improved.

Dickens was taught how to mesmerise people, by Dr John Elliotson, the professor of clinical medicine at University College Hospital (UCH) in London. During the 1840s, Elliotson was the leading advocate for, and practitioner of, mesmerism in Britain. He put on regular public displays at UCH, a number of which Dickens attended.

Through their joint interest in mesmerism Elliotson and Dickens became close friends.

It’s reasonable to assume that Dickens’s knowledge of, and experience in practicing, mesmerism influenced and informed, to some degree, the plot and characterisation of A Christmas Carol.

Interestingly, in A Christmas Carol… or a tale of three therapists? neuropsychologist James Tapper suggests that the literary device of the three spirits (Past, Present and Yet to Come) Dickens uses in A Christmas Carol is a metaphor for something akin to modern psychotherapy practices, involving the identification of unmet emotional needs and elements of the Rewind Technique, which is used to help people overcome phobias and gain relief from PTSD.

So by the time A Christmas Carol draws to a satisfying conclusion, Scrooge is transformed. No longer a greedy, Christmas hating, miser he thinks positive thoughts (e.g. I need to share this newfound Christmas spirit); he feels positive emotions (e.g. gratitude, joy, love, compassion) and does positive things (e.g. sends a giant Christmas turkey to the Cratchit house and provides lavish gifts for the poor). In short Scrooge’s mind-set and life have been changed for ever – he has experienced an incredible personal transformation!

Helping people to overcome obstacles and barriers that stop them from living, and enjoying, life to the full is a passion of mine. If you’d like to experience your own personal transformation in 2018, perhaps become ‘unstuck,’ overcome a limiting belief; break an unhelpful habit or achieve an important goal then contact me today on 021 056 8389 , email tony@tycoaching.nz or simply click on the Book Now box below.

It may well be the best Christmas present you ever give yourself!