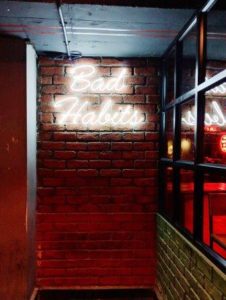 It’s estimated that 95% of our daily behaviours are the product of habits.

This means that essentially our habits are running our lives!

Once any behaviour has been repeated enough times, we become unconsciously competent at it. At that stage it has become a habit.

Habit formation is incredibly useful because the conscious mind is the bottleneck of the brain. Our brain can only pay attention to one thing at a time. As a result, our brain is always working to preserve our conscious attention for whatever task is most essential. Whenever possible, the conscious mind likes to delegate tasks to the subconscious mind to do automatically.

Once we have a suite of habits that cover the routine basics of life, our mind is free to focus on, and master, new challenges. Building habits in the present allows us to do more of what we want in the future.

THE SCIENCE OF HOW HABITS WORK

In Atomic Habits James Clear explains that the process of building a habit can be divided into four simple steps: cue, craving, response, and reward. Clear says that this four-step pattern is the backbone of every habit, and our brain runs through these steps in the same order each time.

First, there is the cue. The cue triggers our brain to initiate a behaviour. It is a bit of information that predicts a reward. In big picture term, the reward is that we get to satisfy one or more of our physical and/or emotional needs.

Our mind is continuously analyzing our internal and external environment for hints of where rewards are located. Because the cue is the first indication that we're close to a reward, it naturally leads to a craving.

Cravings are the second step, and they are the motivational force behind every habit. Without some level of motivation or desire-without craving a change, we have no reason to act. What you crave is not the behaviour itself but the reward it delivers. You do not crave smoking a cigarette, you crave the feeling of relief it provides. You're not motivated by brushing your teeth but rather by the feeling of a clean mouth. You do not want to turn on the television, you want to be entertained. Every craving is linked to a desire to satisfy one or more of our physical and/or emotional needs and in so doing change your emotional state.

Cravings differ from person to person. In theory, any piece of information could trigger a craving, but in practice, people are not motivated by the same cues. For a smoker, stepping outside the building can be a potent trigger that sparks an intense wave of desire. For someone who doesn’t smoke, stepping outside could  trigger  a craving for a coffee.

The third step is the response. The response is the actual behaviour you perform, which can take the form of a thought or an action. Whether a response occurs depends on how motivated you are and how much friction is associated with the behaviour. If a particular action requires more physical or mental effort than you are willing to expend, then you won't do it. Your response also depends on your ability. It sounds simple, but a behaviour can occur only if you are capable of doing it. If you want to run a marathon but your experience of running is limited to chasing after the occasional bus, you’re unlikely to complete the marathon.

James Clear says that if a behaviour is insufficient in any of the four stages, it will not become a habit.

We rarely notice or pay attention to our habits unless a habit starts to harm one or more of our physical and/or emotional needs e.g. our weight is out of control, our health is at risk, our relationship is in danger.

THE FOUR LAWS OF BEHAVIOR CHANGE

Clear presents a practical framework we can use to design good habits and eliminate bad ones. He says that you can think of each law as a lever that influences your behaviour. When the levers are in the right positions, creating good habits is effortless. When they are in the wrong positions, it is nearly impossible. Here are the four laws:

To break a bad habit simply invert these laws.

Clear says these laws can be used no matter what habit you want to form or break. There is no need for completely different strategies for each habit.

If you have ever wondered, "Why don't I do what I say I'm going to do? Why don't I lose the weight or stop smoking or spend more time with my family or exercise more? Why do I say something is important but never seem to make time for it?" The answers to those questions can be found somewhere in these four laws.

The key to creating good habits and breaking bad ones is to understand these fundamental laws and how to alter them to your specifications.

Clear explores each of these four laws in detail in Atomic Habits. I recommend it as a Xmas read. And if you're someone who has, in the past, struggled to achieve your New Year’s resolutions (it’s estimated that every year, 92% of people fail to implement their New Year’s resolutions!) the laws of behaviour change could be the solution you need.

Helping people to change for the better, is my passion. If you'd like to explore how I can help you design good habits & eliminate bad ones contact me on 021 056 8389 or email me at tony@tycoaching.nz or use the Book Now button.

Tony helps individuals to harness the power of their mind to achieve success and well-being in life, work and business. Tony's particular area of expertise lies in helping people to 'change their minds' so they gain freedom from worry, anxiety and stress, overcome limiting beliefs and unhelpful habits. Tony’s solution focused approach to coaching uses a range of techniques drawn from the fields of solution focused coaching, neuroscience, positive psychology and clinical hypnosis.