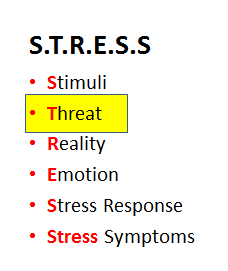 First of all my thoughts and best wishes go out to all my New Zealand readers. I trust this post finds you safe and sound after this week’s massive earthquake, and the ongoing aftershocks and wild weather.

I’ve been in NZ for 30 years and this week’s quake was the biggest and scariest I’ve ever experienced. When the earthquake struck at midnight, my mind and body responded to the event in accordance with the STRESS Process (see the picture on the left).

The sensory information I received – the ground moving vigorously beneath me, the sound of the house creaking, the sight of furniture dancing – was instantly recognized by my mind as a threat and my emotional alarm was immediately sounded, arousing intense fear. The fear triggered the stress response and without any conscious thought I leaped out of bed and raced for for the shelter of a doorway where I was joined by my wife. We remained there until the shaking eventually stopped.

This week’s post is therefore timely in that it discusses how we identify and respond immediately and automatically to threats to our physical and/or psychological well-being, such as earthquakes.

Last week I wrote about about how the STRESS Process begins with our senses detecting stimuli present in the external and internal  (our thoughts, feelings and bodily sensations) environments. These stimuli are relayed to the thalamus, an area in the fore-brain, which acts like a switchboard sending the data simultaneously to the amygdala (located in limbic system - the emotional centre of the brain) and the neocortex (the thinking brain).

The limbic system developed some millions of years earlier than the neocortex and is concerned with instinctive behaviours, such as eating, mating and surviving.  When it comes to surviving, we evolved to react immediately in response to danger and threats. While it's unlikely that in a typical day, we will encounter the same sorts of dangers our ancestors had to face, we still encounter threats in the form of physical (e.g. death or injury caused by an earthquake) and psychological threats (e.g. your status is threatened when your boss criticises you in public).

The amygdala our emotional alarm system

The amygdala — so-named because it is almond shaped and amygdala is Greek for almond — is the limbic system's emotional alarm system, continually scanning the data it receives and interpreting each new stimulus in terms of whether it is safe or a threat such as: "Can I approach this or not? Can I eat this or will this eat me? Will I fight (and win) or should I flee?"

Our evolving brain needed to be able to differentiate between what was safe and what wasn’t, and so the limbic system developed a rudimentary ability for memory and learning so that for instance, we are able to recognise that a tree is not a source of danger. And it does this 'safe vs threat' assessment by a process called ‘pattern matching’, whereby incoming data is matched to memories the amygdala holds that are associated with emotional events. When an exact or near match is made to a previously experienced threat, the fear associated with that memory is aroused.

The amygdala is one jump ahead of the neocortex

Since the amygdala is located closer to the thalamus, sensory data reaches it a half second before it reaches the neocortex. This ability of the amygdala to be one jump ahead of the neocortex was the discovery of researcher Joseph LeDoux.

A half a second is a long time in brain response terms. It means that the emotional brain is in the driving seat, and the amygdala has us responding to a 'threat' before the neocortex has even started to interpret what the incoming data from our senses means. For the amygdala it’s a case of "react now think later”. This makes sense because we would be at a significant disadvantage if we had to stop and rationally determine our best course of action whenever we are in danger.

For instance, imagine you’re in bed and are awoken by a loud banging noise. You experience fear. In the split millisecond before you experienced fear, the amygdala pattern matched to the memory of an occasion when there was loud banging on your door late at night, and you opened it to find your distraught neighbour on the step. She had come to tell you that her house had been robbed. In survival terms it's far less dangerous to assume it's a burglar making the noise and have it turn out to be the wind than to assume it's the wind and have it turn out to be a burglar. So your amygdala arouses fear which instantly activates the stress response. You might respond by snatching for the phone beside your bed and hurriedly punching in 111.

It's only after dialing the number your thinking brain takes control and you realise that the source of the banging is the garden gate, you  forgot to close, moving in the wind.  It is simply a false alarm so your brain deactivates the stress response. Then comes the embarrassing conversation with the officer who answers your 111 call ...............

For many people recurring false alarms can result in us experiencing unnecessary stress and/or a panic attack.

I use the REWIND technique to help people reprocess  intense emotional memories locked in the amygdala, so that false alarms no longer make them respond with fear and stress. The technique is a comfortable, effective, safe process that can greatly reduce, and even remove, traumatic or phobic symptoms quickly. You can read more about the technique here.

If you have a heightened sense of anxiety following the earthquake and after shocks I can help you to reduce that anxiety.

To find out more about how you can overcome anxiety and reduce stress, simply invest in a no obligation complimentary 60 minute consultation. It could prove to be the most valuable and life changing 60 minutes of your life.

Wishing you a safe and calmer week.

P.S. Please do ask me any questions you may have about anxiety and stress - I am always delighted to answer them.

Tony Yuile is hired by people seeking help to perform at their best in one or more areas of their lives. He's a personal performance coach & hypnosis professional based in Wellington NZ, where he specialises in helping people perform under pressure, reduce anxiety and manage stress. Tony’s solution focused approach to coaching uses a range of techniques drawn from the fields of co-active coaching, hypnosis, positive psychology and neuro-linguistic programming (NLP).

Contact Tony today to discuss how he can help you, or if you think Tony could help someone you know, you might like to encourage them to get in touch with him.

This article contains the personal views and opinions of the author, which may change over time. It is intended to be for information only and does not constitute medical advice. For medical and health advice, always consult a qualified medical professional.